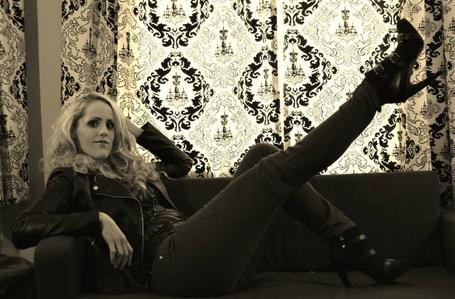 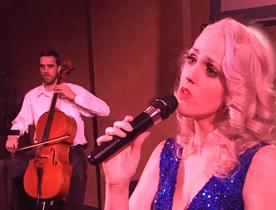 What her fans are saying...

" A jazz vocalist and performer at heart, who's variety ranges from tender jazz standards to rockin ballads and diva level performances, all in one show."

"Versatile but distinct, powerful but nimble, controlled but always full of personality and character."

Heidi started singing at a very young age with musicals at her church. She went on to pursue her passion at Youngstown State University where she received her Bachelor's in Music in Vocal Performance.

Although her focus was in opera and classical singing, Heidi developed a passion for musical theater, jazz, blues, rock, and pop music as well. She began singing lead and back-up vocals in bands, including a Transiberian Orchestra cover band, an 80's Rock band, and a jazz duo to name a few. She also found she had a knack for harmony, and continued her musical pursuits singing by singing both alto and soprano in multiple choirs.

Heidi continued her training at Kent State University, receiving her Master's degree while teaching voice lessons and voice class as a graduate assistant.

While living in Sarasota, FL, Heidi worked as a soloist and section leader in  professional choirs, including GLORIA MUSICAE, where she helped premier new and exciting choral works. Heidi also had weekly gigs with JUST FRIENDS a piano/ voice jazz duo.

Currently based in Portland, OR. Heidi has performed with various choirs, jazz ensembles, and rock bands. Heidi also continues to develop her own theater company, Torchsong Entertainment, where she writes and produces exciting and unique original rock musicals. For more information on Torchsong Entertainent visit: www.torchsongentertainment.com .

Heidi has been involved in countless productions in professional, collegiate, and community venues. She has performed lead and supporting roles in musicals, operas, and plays in a wide variety of genres and styles. She has also been involved in several improv dinner theatre productions, a genre in which her creativity, comedic instincts, and vocal versatility have served her well.

Some of her favorite roles in musicals have been Lucy in JEKYLL & HYDE, Hope in ANYTHING GOES, The Baker's Wife in INTO THE WOODS, Eliza Dolittle in MY FAIR LADY, The Sour Kangaroo in SUESSICAL: THE MUSICAL, Mae in REEFER MADNESS, Vicki in THE FULL MONTY, Flora in NO, NO NANETTE, Grace in ANNIE, Tuptim in THE KING AND I, Jenny in COMPANY, The Mistress in EVITA, Sonia in GODSPELL, and The Narrator in JOSEPH... DREAMCOAT.

In the world of opera, Heidi has performed as Ruth in THE PIRATES OF PENZANCE, The Baroness in THE MERRY WIDOW, Miss Juniper in THE GOLDEN APPLE, The Mother/Dewfairy in HANSEL & GRETEL, Kate Pinkerton in MADAMA BUTTERFLY, and Annina in LA TRAVIATA.

Heidi is also a talented actress, having performed both dramatic and comedic roles in classical and contemporary theatre. Her favorite roles include Desdemona in OTHELLO, Barbara Smith in RUN FOR YOUR WIFE and CAUGHT IN THE NET (in repertory), Frosine in THE MISER, Edna Edison in THE PRISONER OF 2ND AVENUE, Donna Marsala in TONY & TINA'S WEDDING, Helen Norton in ROMANCE IN "D," and Debbie in THE AMOUROUS AMBASSADOR.

Heidi is an experienced comedic  improvisational actress, as well, having performed in countless improv dinner theater productions and in improv troupes. She trained for several years in a musical improv ensemble at Curious Comedy Theater in Portland, OR, and continues to do musical improv shows around town.

With Red Shoe Productions in Portland, Heidi has also found work as a character performer and emcee for events across Oregon and Washington. Her favorite characters she portrays are Elsa from Frozen, Cinderella's wicked stepmother, Cruella de Ville, Jesse from Toy Story, and her comedy idol,  Lucille Ball.